The erosion of the rule of law is one of the most important civil and human rights issue of our time.  Judges, their judiciaries, and color of law actors within America’s legal system who have violated the supremacy of the Constitution or law must be held to redress for their heinous crimes against civil liberties. America’s principle of non-discrimination, equality and equal protection before the law without discrimination, are founded in international human rights law and form the foundation of the rule of law. The Human Rights Committee stated that the right to equality before the law, “prohibits discrimination in law or in fact in any field regulated and protected by public authorities” and that “Article 26 of ICCPR is therefore concerned with the obligations of States parties in regard to their legislation and application thereof. Thus, when legislation is adopted by a State party, it must comply with the requirement of article 26 that its content should not be discriminatory.” October 24, 2019: Reparations for victims of human rights violations are not optional, says a new report by UN expert Fabián Salvioli (Special Rapporteur) shall deal with situations in which there have been gross violations of human rights and serious violations of international humanitarian law. Self interest-conflicted politicians have not proposed pragmatic judicial accountability bills. In the public interest, there must be nationally televised congressional hearings with citizen testimony on judges’ abuse of power.  It is time to hold these public servants accountable for widespread fraud and liable to their victims. My story documents family court judges’ abuse of power and blowing the whistle on the connivance between power and politics. Family Court is not about the best interest of the child, it is about the state’s treasury and maximizing multi-billions in federal child support incentives, under Title IV-D.  Family Courts subject litigants to bench warrants (no bond), the loss of homes and all contents, professional licenses, retirement accounts, and life savings for parental rights. Divorced parents are a targeted “debt ower” group being denied basic Constitutional and human rights by being subjected to draconian, tyrannical state procedures depriving them of their substantive and procedural due process rights, as well as equal protection under the law.   In South Carolina, Walter Scott was shot dead for fleeing a child support warrant. The State made me a fugitive by the issuance of 4 bench warrants. Senator Nancy Schafer stated,  “Child support is a crime against humanity for financial gain, rights removed from parents as human rights, civil rights, and even religious rights.” Family Courts’ failure to abide by the Rule of Law should be the subject of a UN Human Rights investigation. Next, Congress Must Ratify the Treaty for America to Join the International Criminal Court. 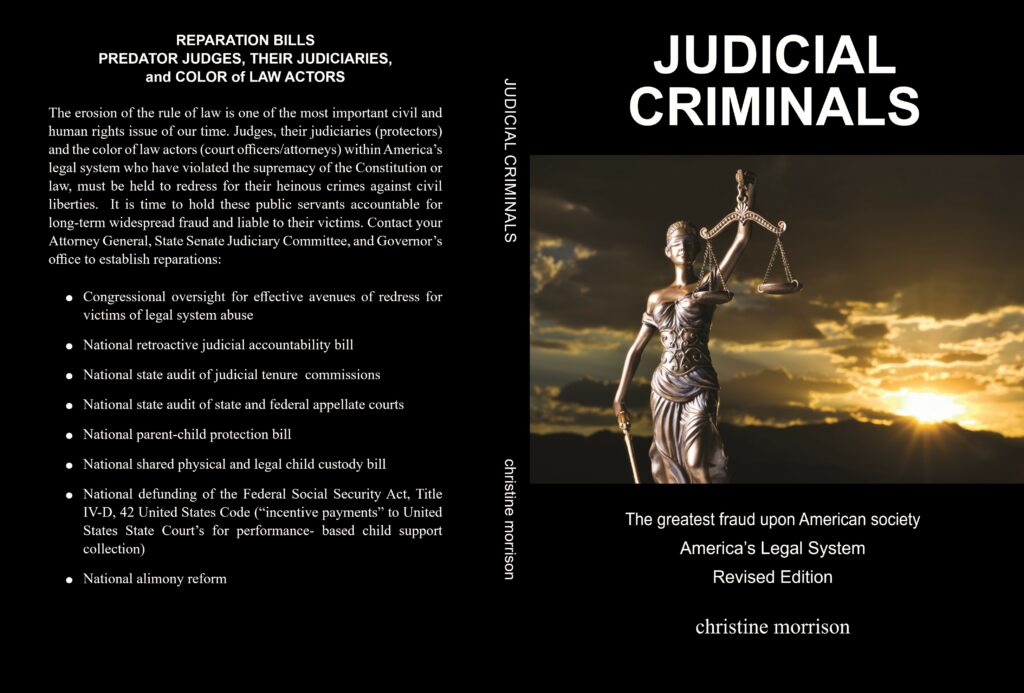 Lawyers have a special duty to address injustices done in the name of law. ABA President Judy Perry Martinez pledges action in her statement.

the Cassel case leads to an absurb result-one that allows lawyers to be sloppy, negligent and incompetent without cost to them, and even worse, to cheat their clients with impunity.

Parents Who Make Allegations of Abuse in Child Contact Cases – Voice of the Child Podcast by Natasha For our sixteenth Voice of the Child podcast we speak with Professor Joan Meier about the first ever nationwide study in the US on child custody cases which feature allegations of abuse, domestic violence and parental alienation, and how those allegations affect mothers’ contact rights in court.
Professor Meier explains the findings from her research, raises concerns around “junk science” used in child cases, and calls for a Me Too Movement within the family courts to raise awareness about gender discrimination and the impact of gender bias on child protection.

Looks like an interesting read. Our justice system is broken in so many ways….

The abuses of parents and children by Family Courts, social   workers, and family law attorneys have harmed children and parents for far too long. Family court is designed by makers to be probably the most dangerous life event parents and children can endure. And behind the curtain of this machine of misery we’ve uncovered its cause-the multi-billion dollar divorce industry, populated by judges, attorneys, and a machinery of tax-dollar fed “judicial administrators,” social workers that George Orwell would marvel at.

We’ve been delivering that message kindly for years now, yet the tide keeps rising on families in crisis. We’ve appealed to the county courts, state and local politicians, state judicial oversight bodies, United States Representatives, and just plain old human dignity, but the harassment and abuse of parents and children has only increased. A resort to federal court intervention in the widespread criminal collusion in state government was the next logical step.

It’s time to recognize Family Court for what it is—a corporate crime ring raiding parents and children of financial and psychological well-being, and devouring our children’s futures. And its not just divorce lawyers—its judges, “judicial administrators,” psychologists, cops and prosecutors—people we should be able to trust—in a modern day criminal cabal using county courtrooms and sheriff’s deputies as the machinery of organized crime. Since state officials’ hands are too deep into the cookie jar to stop their own abuse, we’re seeking the assistance of federal oversight.

The U.S Constitution guarantees BOTH biological parents their rights to their children without interference from the state and judicial system. As for parenting time interference-jail the custodial parent.  ..Non-custodial parents are financially driven away from their families post-divorce and the Hardworking Taxpayers of America are being defrauded in the process.  By law, a child support payment is paid to children from BOTH parents, not just one parent.  Child support is not de facto alimony.  New Jersey and other states are obtaining federal funding for its child support enforcement agency/program under false claims of compliance with federal civil rights laws and the U.S. Constitution (due process and equal protection violations).  Divorced dads are a selected and targeted group of people being denied basic Constitutional and human rights by being subjected to draconian, tyrannical state procedure depriving them of their substantive and procedural due process rights, as well as equal protection under the law when the State fails to comply with federal regulations, and ultimately with the U.S. Constitution. The Federal Child Support Enforcement Acts require States that accept federal funds waive their Eleventh Amendment immunity to suits brought in federal court for violations of this law under Equal Protection grounds. Since child support obligations are commercial debts, and are therefore civil matters, no one can be arrested for owing child support because there is no probable cause to arrest in a civil matter. Probable cause only exists in the criminal context; it can never exist in a civil context. The U.S. Supreme Court and U.S. Court of Appeals have held this to be so. Arresting and imprisoning someone without probable cause is kidnapping for profit and reward, false arrest, false imprisonment, malicious abuse of process, malicious prosecution, an assault, etc.  Also, in New Jersey, child support awards, collections and enforcement processes are directly/indirectly linked to judicial and state employee pension plans. The U.S. Supreme Court has held that for judges to act as objective, neutral adjudicators, they cannot have a financial interest in the outcome of cases before them. In these situations, a judge sitting without a jury is tempted to jail/imprison innocent people for debt simply to increase state child support collections to maximize the state’s receipt of federal funding. Imprisonment for debt is prohibited by all 50 States and the Federal Government.

A California appeals court also declared that some Child Support incarcerations were a violation of the 13th Amendment for involuntary servitude *fn64. Federal enforcement of Child Support through the IRS, as proposed in H.R. 1488, is arguably unconstitutional by forcing the states to comply with Title IV-D *fn65. The United States Supreme Court stated *fn66, “Congress is without power to enlist state cooperation in a joint federal-state program by legislation which authorizes the States to violate the Equal Protection Clause.” and “[W]hile the Fifth Amendment contains no equal protection clause, it does forbid discrimination that is ‘so unjustified as to be violative of due process.’ In child support politics, the Constitution has become passé and encumbers or impedes the cash machine that has been created. In this entire domain of “Family Law” the Constitution as we know it has ceased to exist. “State judges, as well as federal, have the responsibility to respect and protect persons from violations of federal constitutional rights.” *fn67 This responsibility has been abandoned to pursue Title-IV funding for the states.

According to Article 8 of the universal declaration of human rights provide that:

Everyone has the right to an effective remedy by the national tribunals for acts violating the fundamental rights granted to him by the constitution or by law.

Furthermore,  the International Covenant of Civil and Political Rights  Article 2, paragraph 3(a) and (b)  provide that:

3.  Each State Party to the present Covenant undertakes: (a) To ensure that any person whose rights or freedoms as herein recognized are violated shall  have an effective remedy, notwithstanding that the violation has been committed by persons acting in official capacity; (b) To ensure that any person claiming such a remedy shall have his right thereto determined by competent judicial, administrative or legislative authorities, or by any other competent authority provided for by the legal system of the State, and to develop the possibilities of judicial remedy…

Therefore, victims of legal system abuse denied a fair and impartial administration of justice, should receive reparations without regard to applicable statutes of limitations or limiting provisions due to ineffective judicial/administrative remedies.